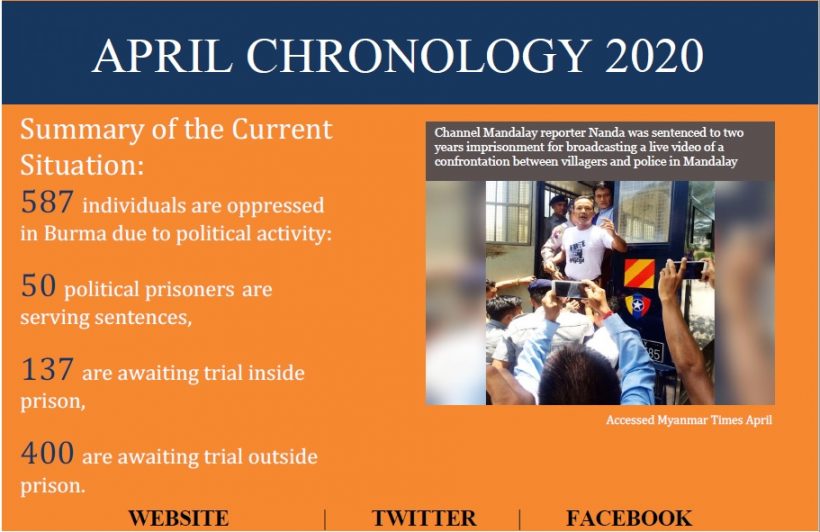 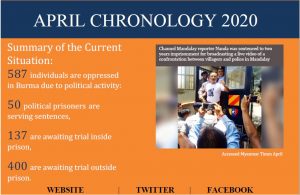 The right to freedom of expression in Burma remains vulnerable. In April, three members of the Kachin Regional Research Group including Director Naw Tun Aung, Ko Zeyar Nye and Ma Ja Seng were charged under Section 295 (a) of the Penal Code. In April, Ko Naing a.k.a Aung Kyi Myint, a reporter from Channel Mandalay TV, was sentenced to two years imprisonment, along with two villagers, Aung Naing and Chit Min under Section 332, 147 of The Penal Code. Journalists are responsible for their work and prosecuting them under criminal penalties has greatly undermined the media sector. According to the French Press Freedom Index (RSF), Buma’s freedom of press Index has been declined year after year. According to these indicators, Burma’s freedom of the press has steadily dropped from the rank of 131 in 2017, to 139 in 2020. This is a matter of concern for the media sector and shows the urgent need for protection of the media community. Arresting, prosecuting, and punishing those who exercise their freedom of expression and speech is a deviation from the path of democracy. Freedom of expression is not a threat to the government, but a request for reform. Freedom of the press in Burma is continuing to decline, and journalists are still under threat.Therefore, the Assistance Association for Political Prisoners (AAPP) urges the Government to take action to promote freedom of the press and promote the rights of journalists.

During April, as a positive step, 24,896 prisoners, including 26 of the political prisoners submitted for consideration for release by AAPP were released in the annual Presidential pardon. However despite this release, prisons remain overcrowded. This is particularly concerning during the COVID 19 epidemic. Therefore, AAPP calls for the release of more prisoners, including the 50 political prisoners who remain behind bars arbitrarily.

During the ongoing epidemic of COVID-19, various human rights abuses in Burma continues unabated. In particular, with the ongoing armed conflict in ethnic areas, indigenous peoples have also suffered serious harm. Some of the events that took place in April are listed below

Indigenous people living in ethnic areas have been facing fears of human rights abuses by armed groups such as arrests, torture, and killing. Given the threat of COVID-19,  fighting in ethnic areas must be stopped as soon as possible and ceasefires should be implemented as soon as possible. UN Secretary-General Antonio Guterres has appealed for “urgent action to end the global mass shootings and put an end to the disease that destroys our social world.”  At present, there is a great need for the protection of indigenous peoples living in ethnic regions in Burma, due to conflict and the threat of COVID-19.