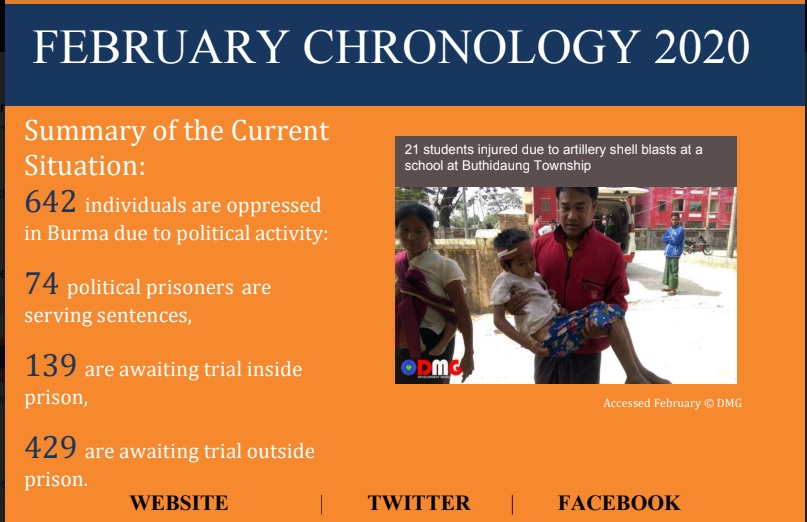 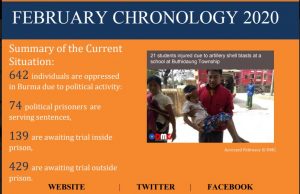 Consequences of Conflict in Ethnic Regions

Despite the signature of the Nationwide Ceasefire Agreement (NCA) in 2015, ethnic conflicts have continued with EAGs who have not signed the NCA, but also skirmishes have continued with those that have signed the NCA. Over the last year fighting between the army and Arakan Army (AA) has intensified. Indigenous people continue to suffer a disproportionate amount from the effects of these armed conflicts. The incidents of February are shown below;

The incidents above are human rights violations in armed conflicts committed by state and non state forces. In both cases the perpetrators enjoy impunity. February 20 is the day of The World Day of Social Justice which states that “Social justice is an underlying principle for peaceful and prosperous coexistence within and among nations. We uphold the principles of social justice when we promote gender equality, or the rights of indigenous peoples and migrants. We advance social justice when we remove barriers that people face because of gender, age, race, ethnicity, religion, culture or disability.” Therefore, we urge the government to protect indigenous people who suffer the consequences of fighting that haven’t ended yet and to enact the reparation law for those who have suffered from human rights violations.

Land confiscation and disputes are still unsolved in Burma. In February,  133.12 acres of land, which were confiscated by the Ministry of Industry in Ywar Thit Gyi Sanpya Village in Sagaing Division, were returned to the original farmers. Despite this, many more land seizues remain contested.

Therefore, we urge the government to promote the Land Sector and to promote and protect the benefictory of farmers who are facing the consequences of land loss and are vulnerable to the various land issues. Moreover, we urge the government to enhance the farmers rights by following and respect the Law of Protection of the Farmer Rights and Enhancement of Their Benefits International Covenant on Economic, Social and Cultural Rights (ICESCR) that was ratified by Burma.