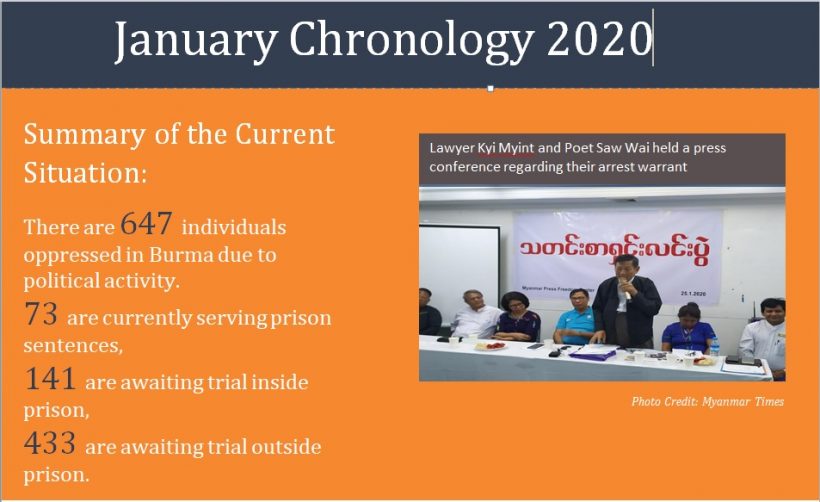 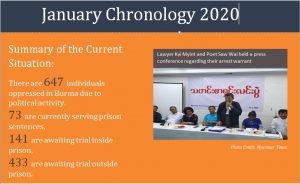 It has been almost five years since the current government took over the power; however, the freedom of expression in Burma is still under threat. In addition, there has not been amendments to the laws that continue to oppress the freedom of speech of activists and civilians. In January, seven members of the Peacock Generation Thangyat Troupe were prosecuted and Wai Wan Phyo Moe, vice chairman of ABFSU, Ye Yint Kyaw, former executive ABFSU member, Thint Shein Soe, secretary of Myanmar Industries Craft and Services Trade Unions Federation, Zop Dot Sawm Naw, Kachin Literature and Culture Association chair, and writer Marn a.k.a Taung Lone Pyan, were sentenced for exercising their freedom of speech.

The prison reform process must also be a priority, in order to improve the human rights situation in Burma. A positive step in January is that a vocational school in Obo Prison in Mandalay has been constructed, the training will be provided from February and prisoners who are due to be released soon will be given priority for training in technical and electrical skills. Furthermore, more than 170 inmates across the country will take the matriculation exam this year. Although we welcome these steps, all inmates should also be provided with the opportunity for vocational training throughout the country. This will support the rehabilitation process after their release. In addition, the various issues including prison overcrowding still need to be addressed.

As Burma is a country based on agriculture, it must protect and promote the interests of farmers. However, farmers struggle as they face land confiscation and disputes for many years. At the end of January, there are 15 farmers serving prison sentences, a total of 123 farmers are facing trial outside prison and 21 farmers are facing trial inside prison in relation to land confiscation and disputes. For this reason, AAPP urges the government to release the farmers who have been sentenced and discharge the cases of the farmers who are facing trial. Besides, we urge the government to enhance the farmers rights by following and respecting the Law of Protection of the Farmer Rights and Enhancement of Their Benefits and International Covenant on Economic, Social and Cultural Rights (ICESCR) that was ratified by Burma.

The indigenous people have long been targeted by the both ethnic armed groups and the Burma Army due to the unresolved armed conflicts in Burma and continue to face threats. With the serious fighting that has continued between the Burma Arma and the Arakan Army (AA) in January, human rights violations have continued to occur.

army soldiers poured scalding water on her body  and cut her legs with a knife. (Colonel Win Zaw Oo, a spokesperson for the Tatmadaw’s Western Command, denied the allegations)

Throughout the country indigenous peoples are affected due to a lack of peace. Moreover, armed groups have continued to avoid accountability and responsibility for these human rights abuses. The Burma Army released a statement on the final report of the Independent Commission of Enquiry-ICOE on 21 January, according to the Burma Army True News Information Team. The statement stated that the court of inquiry will continue investigations regarding any wrongdoings by those within the chain of command and the Office of the Judge Advocate General will take action in conformity with military justice procedures if there is credible evidence of any commission of offence by members of the Burma Army. In addition, the president office published a press release stating that the President concurs with the recommendations of the Commission, that there needs to be further criminal investigations and, where the evidence is compelling, prosecutions.

On January 23, the International Court of Justice ruled to impose provisional measures on Burma and decided four points including Burma take steps to prevent further acts of genocide.

We welcome investigations into human rights abuses and urge the government to provide justice for those indigenous peoples who have suffered. In addition, we urge the government to sign and ratify the Convention against Torture and Other Cruel, Inhuman or Degrading Treatment or Punishment (UNCAT) and International Covenant on Civil and Political Rights (ICCPR) in order to protect against human rights abuses and to respect civil and political rights.