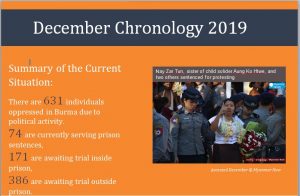 In December, activists and civilians who have exercised their right to freedom of expression, are continued to be oppressed. A total of seven people were sentenced in December, they were  Nay Zar Tun, the sister of a former child soldier, Khin Cho, and Zaw Myint, four members of Peacock Generation, Zay Yar Lwin, Paing Ye Thu, Paing Phyo Min a.k.a. D Yay, and Su Yadana Myint.

While the freedom of speech and expression faces threats, the civil rights of the citizens are also restricted. In December, Naing Tun Aung, Min Thein, Phoe Mar, Kyaw Zayya and hundred households administrator Moe Linn, residents of Aung Thabyay Village in Patheingyi Township in Mandalay Division, were arrested in connection with a protest of a cement factory near Aung Thabyay village and were charged and prosecuted under Section 436, 440 and 114 of the Penal Code. Moreover, hundred households administrator Moe Linn of Aung Thabyay Village had been sentenced under Section 505(b) of the Penal Code. The Sentencing of civilians delays national reconciliation and violates citizens human rights. Therefore, we urge the government to implement national reconciliation by immediate developing the basic rights of its every citizen.

Prison Reform and the Role of the Key Population

While the prison conditions in Burma are still deteriorating, the various prison issues have been occurring due to the consequences of the prison overcrowding. In addition, prisoners have been violated their rights, have been faced tortures and discriminations. Besides, a riot took place at Myinchan Prison in Mandalay Region in December.  In order to end and stop these things happening, the prison reforms have to be implemented as soon as possible. The Assistance Association for Political Prisoners (AAPP) reiteratively urges the government to reform the prisons and had already published reports of the Prison Conditions in Burma and The Potential for Prison Reform and Prison Overcrowding and the Need for Urgent Reform. Furthermore, we are working with the Myanmar National Human Rights Commission (MNHRC), the relevant Hluttaw committees and the organizations working for the prison issues and also holding the workshops.

While carrying out the prison reform, it is essential to protect the key population in detention centers, prisons and labor camps. As the key population is vulnerable, they have more suffer human rights abuses. Accordingly, a key population must be considered to reform the prison. From November 4 to November 5, the Assistance Association for Political Prisoners (AAPP) organized the workshop with the organizations working for Key populations and organizations leading the former political prisoners at AAPP office. Moreover, on December 7, AAPP held a consultative workshop on prison reform in Naypyidaw. A total of 52 people, including 25 members of committees of the lower house, eight members of Committees of the upper house, people from organizations led by political prisoners, and Key Population organizations attended the workshop. At the workshop, we discussed the Key Population. Furthermore, we will be releasing a report on this in March 2020 and sharing our findings with stakeholders and the relevant parliament committees

It has been approximately one year since the start of increased armed clashes between the military and the Arakan Army (AA). With the increase of human violations during armed conflicts, the indigenous people deteriorate faced the human abuses in accuse of the relation of both armed groups. The incidents occurred in December highlights shown below;

In December, five civilians including eight years old child from Kyauktaw, Minbya and Ann Townships were shot to death by the military column. In addition, six civilians injured by firing by both armed groups during clashes. Furthermore, seven civilians including three children from Mrauk-U and Myebon Townships in Arakan State and Paletwa Township in Chin State died due to the artillery shells exploded and 35 including six children from Mrauk-U, Minbya, Myebon and Paletwa Township injured.

In December the Arakan Army arrested Chairman of NLD in Buthidaung Township Ye Thein, 24 youths from Mrauk-U Township, three immigration officials and two employees of the Mytel Company and 16 car drivers from the Road Transportation Administration Department who were aboard the ferry.

In December, the Arakan Army (AA) arrested a total of 46 civilians. Ye Thein out of 46, who is the chairman of the NLD in Buthidaung Township, was killed by a shell explosion while being held in Arakan Army (AA) detention.

The peace process has to be implemented immediately to end and overcome the armed conflict in Burma and the independent investigation commission has to be formed to prevent and protect human rights violations. Ethnic Armed Groups cannot operate in impunity.

The Assistance Association for Political Prisoners (AAPP) has listed, based on the information in relation to the Arakan Conflict from January to December of 2019, a total of seven political prisoners from Arakan State, who are serving their prison sentences in relation to the Arakan Conflict, there are a total of 121 local Arakanese are facing trial inside prison and nine are facing trial outside prison. The picture is shown below;

Having been recruited as a child soldier in their early years, children will not only lose their right to a childhood but also suffer physical and emotional trauma. Therefore, Burma has to respect and protect the provisions of these treaties as the country has ratified two international child protection agreements. Hence, we encourage the government to scrutinize the recruitment of child soldiers in Burma and act accordingly.

In December, the issues of land confiscation and land disputes have continued unabated. Below are some of the events that have taken place in relation to land issues in December.

In May 2016, the Central Committee for the Review of Land Confiscation was set up. Although 3,480 complaints have been sent to the Central Committee, only five were answered according to the annual report of the lower house of the farmers and labor committee. Therefore, the land issue is in a very vulnerable position and needs to be addressed as soon as possible. Land confiscation that continues for many years and ongoing land disputes have caused significant damage to indigenous people and farmers. For that reason, we encourage the Government to promote the interests of indigenous peoples and farmers by addressing the issue of land as soon as possible.