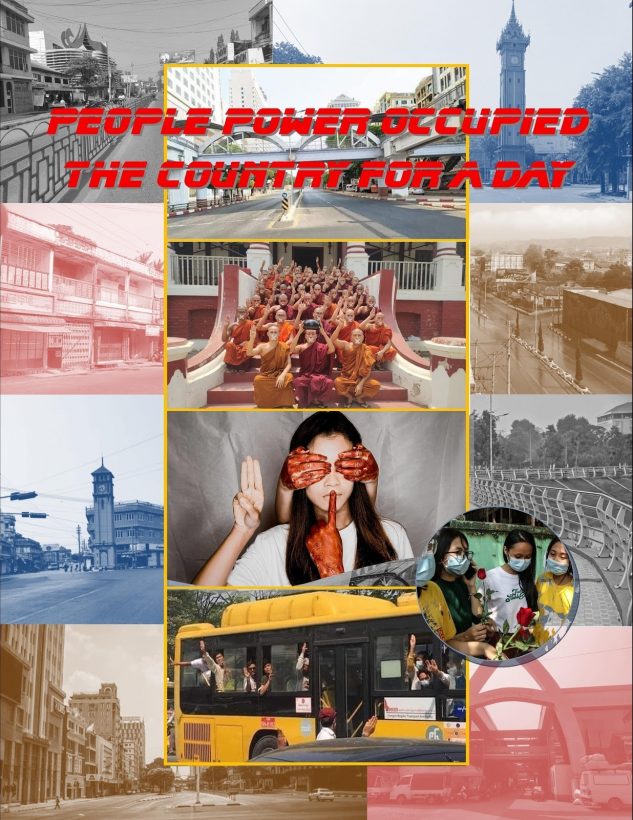 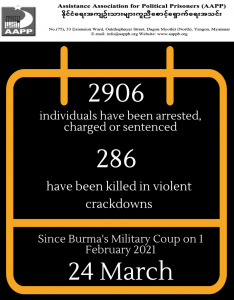 The Assistance Association for Political Prisoners (AAPP) has documented and identified (275) heroes killed yesterday (March 23), and (12) heroes killed today. However, one person previously included in the list of casualties was removed today, details further below. Therefore, (286) heroes have been killed so far. That number is documented and verified by AAPP, and the actual number of casualties is likely much higher. We will continue adding as and when.

As of March 24, a total of (2906) people have been arrested, charged or sentenced in relation to the attempted military coup on February 1. Of them, (24) were convicted. (109) have been charged with a warrant and are evading arrest, and (394) were released as of yesterday. (628) people, including students and civilians, were released across Burma today. The names of today’s released detainees have not been immediately available to compile. Therefore, we will provide the list of names who were released and remain in prison.

The silent strike, so-called “the silence is the loudest cry” was held across Burma today to protest this military dictatorship. Nobody left their homes, shops and shopping centers closed and no cars or people were seen on the roads. Demonstrating the general public’s solidarity against dictatorship. Only some sit-down strikes were held because they did not know about the silent strike campaign from lack of internet connection.

Ko Man Swin Khaing (a.k.a Wai Yan Maung Maung) was removed from the fatality list. He was shot in the thigh and disappeared during the North Okkalapa strike. His family members went to hospitals, police stations, and Insein Prison to investigate, but no further information was found, his family therefore assumed he died and held a funeral for him on 7 March. This is why his name was added to the AAPP fatality list, he is since included in the release list today. AAPP sincerely apologizes to all people, including the victim, and those citing our data with trust.

While people adhered to the silent strike, the military junta last night went around communities and announced with loudspeakers the country was in a stable condition with no danger, and that people should carry on their daily lives as usual. At the same time, more than 600 students and civilians were released. The released raised the three finger salute on their way home to show solidarity with the people and opposition to the military dictatorship.

However, according to AAPPs confirmed data, over 2000 detainees are still detained, sentenced, or face outstanding warrants. The junta coup continuously arrests, and today the military and so-called police raided Kyauk Myaung in Tamwe township, Yangon and captured the people there. Furthermore, they yelled and threw sound grenades, opening fire with live bullets onto Myanandar 13th Street, Yankin township and raided two houses, attacking and detaining 17 people including a 14-year old 8th Grade student.

The coup junta commits these crimes against humanity, brutally arresting children, taking away dead bodies. Last night, they attempted to loot the body of a 7-year-old child who was shot and killed by the junta in Mandalay. Family members of the killed child were able to escape with the body of the child, in response the junta destroyed the house in rage. Moreover, the junta beat the head of the child’s brother with a gun, tortured and  dragged him away. There has been no further news and he is assumed dead by his family. Such incidents are extreme human rights violations, children and their lives are given no dignity, constant threats to their security and education.