Statement on Recent Detainees in Relation to the Military Coup 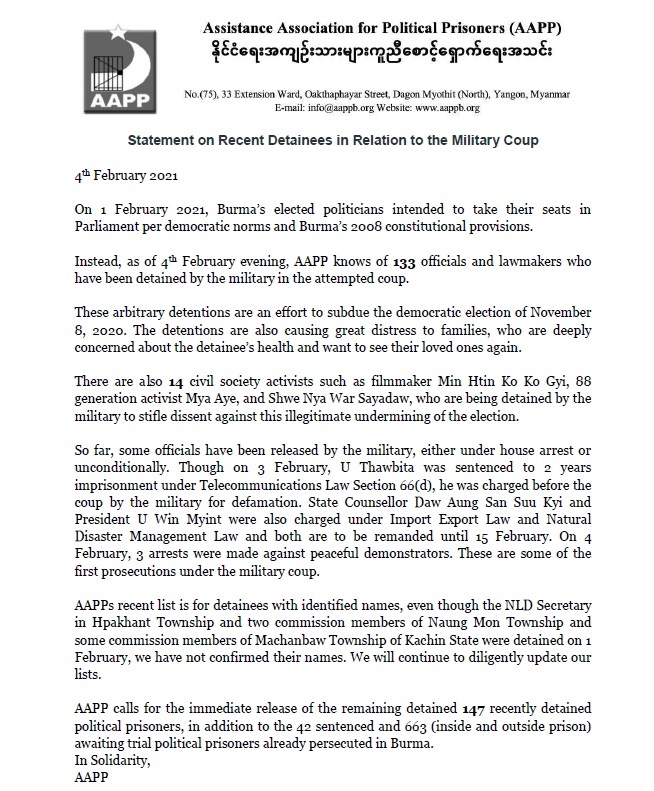 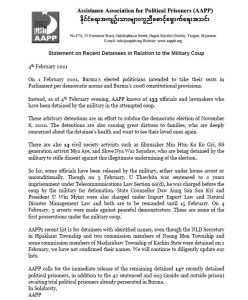 On 1 February 2021, Burma’s elected politicians intended to take their seats in Parliament per democratic norms and Burma’s 2008 constitutional provisions.

Instead, as of 4th February evening, AAPP knows of 133 officials and lawmakers who have been detained by the military in the attempted coup.

These arbitrary detentions are an effort to subdue the democratic election of November 8, 2020. The detentions are also causing great distress to families, who are deeply concerned about the detainee’s health and want to see their loved ones again.

There are also 14 civil society activists such as filmmaker Min Htin Ko Ko Gyi, 88 generation activist Mya Aye, and Shwe Nya War Sayadaw, who are being detained by the military to stifle dissent against this illegitimate undermining of the election.

So far, some officials have been released by the military, either under house arrest or unconditionally. Though on 3 February, U Thawbita was sentenced to 2 years imprisonment under Telecommunications Law Section 66(d), he was charged before the coup by the military for defamation. State Counsellor Daw Aung San Suu Kyi and President U Win Myint were also charged under Import Export Law and Natural Disaster Management Law and both are to be remanded until 15 February. On 4 February, 3 arrests were made against peaceful demonstrators. These are some of the first prosecutions under the military coup.