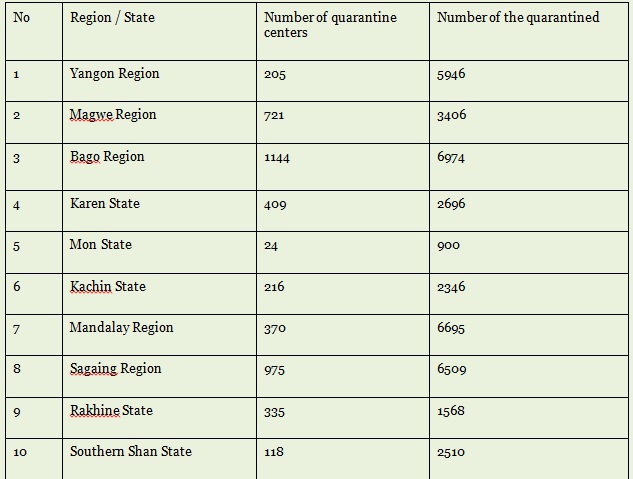 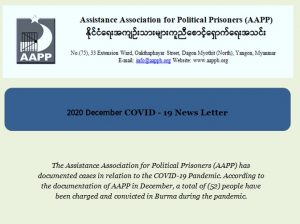 The Assistance Association for Political Prisoners (AAPP) has been monitoring and documenting cases related to COVID-19 Pandemic since April and releasing a monthly COVID Newsletter. According to our documentation in December, a total of (52) people have been charged and convicted in Burma during the pandemic.

As of 16 August, COVID-19 infected cases have reappeared in Rakhine State; the outbreaks have also been reported in Yangon and other states and regions. The second wave of COVID hit Yangon most, and townships in Yangon Region are now ordered to stay at home due to the number of COVID-19 confirmed cases and deaths increase highly. Up to December 31, a total of 124,630 people had been infected and 2682 had died.

Moreover, even though the COVID-19 pandemic is currently decreasing in Myanmar, prisoners and detainees are being infected with the COVID-19 virus. COVID-19 found in prisons and custodies is a difficult and uncontrollable situation. COVID-19 is currently being infected in prisons and custodies in some states and regions. This is a concern for inmates in prisons and labor camps, and the overcrowding in prisons could make it difficult to control the spread of the disease if one prisoner got infected. Therefore, authorities must stop unwanted arrests for the time being. Also, we suggest authorities need to be transparent about the real prison situation (for example: How many inmates are infected?  How are the authorities trying to prevent infection? Etc…).

(52) Persons have been charged under Section 25, 26, 29 and 30 (a) of the Natural Disaster Management Law for contravening the specified orders.

The number of quarantined people and quarantine centers in each state and region of Myanmar as monitored and documented by AAPP is shown in the table below: 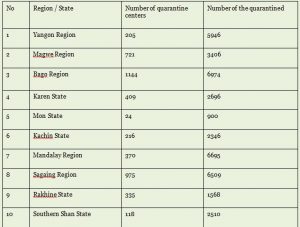 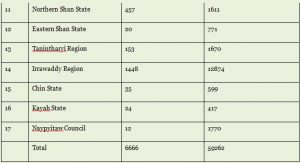 Infected with COVID19 in prisons and cells

Two members of police force and 17 detainees found infected with the COVID-19 virus in Bago Township Police Station No. 2

On 23 December 2020, a detainee was found infected with the COVID-19 virus in Pathein Myoma Police Station, according to the Ayeyarwaddy Regional Police Force.

The detainee, who had been infected with the virus, had only been in police custody for a few days. The first test showed no virus, but the second test showed the virus, said a police officer Tun Shwe from Ayeyarwaddy Regional Police Force.

The infected convicted person is being treated in the Isolation Ward of the Katha Public Hospital and the Bamauk Myoma Police Station was locked down.

Four people who were kept in quarantine center were charged with Natural Disaster Management Law at Myitkyina Myoma Police Station by the Duke Htaung Ward Administrator for going out without permission from a quarantine center of the Education College, Myitkyina Township and drinking alcohol at a restaurant on 24 December 2020. Those 4 people who are released from a prison in China.

According to the Thaton Myona Police Station, authorities raided the Sunday KTV & Restaurant for illegally opening on the road of Yangon-Mawlamyine in Myaynigone Village, Thaton Township, Mon State on 26 December 2020 at 1 am. Found inside was a manager 52-years-old, a head waiter 27-years-old, a waiter 27-years-old, 8 girls and 10 customers, who were arrested. Those 21 people were charged under section 25 of the Natural Disaster Management law at Thaton Township Court, according to the Thaton Township Administration Office.

On 27 December 2020, Ma Htar Htar Oo was charged under section 25 of the Natural Disaster Management Law at the Lashio Township Police Station by COVID-19 Prevention and Control Committee for withholding information about her travel history in Lashio Township, Northern Shan State.

On 25 November 2020, Ma Htar Htar Oo and her mother came back from Mandalay to Lashio Township. On 26 November 2020, her mother passed away and 245 people, including relatives and neighbors came to her mother’s funeral. After being investigated by the Department of Health, she was kept in the quarantine center and tested. On 6 December 2020, her test result was positive. On 27 December 2020, on the deadline of her quarantine she was charged, said the Chairman U Arkar Lin of the Lashio Township COVID-19 Prevention and Control Committee.

On 26 December 2020 at 11:45 pm, when police officers and Bahan Township Administrator checked the World Wide KTV in Saya San Street, Sayar San Ward, Bahan Township, Yangon Region, they found 9 people including 4 customers. The manager U Aye Tun was charged under section 25 of the Natural Disaster Management Law, 4 customers, including Aung Zaw Oo and 4 girls, including Yamin were charged under section 30(a) of the Natural Disaster Management Law. Except the manager Aye Tun, the shop manager and four other men and four women were released on bail on 27 December 2020.

Similarly, the Myst Bar & Lounge Yangon nightclub on University Avenue Street No. 1, Bahan Township, which was illegally operating during the COVID-19 period, was raided by the Rangoon Region Police and a joint team on November 7 at around 2 am, and more than 80 people were arrested.

The Palate Police Station has opened a case regarding the death and the body was taken to the Mandalay General Hospital to be tested for COVID-19 infection, according to the police force.

In Amarapura Township, Mandalay Region, a photocopy shop had action taken against it for forging COVID-19 clearance certificates and township passing cards, according to the township authorities. On December 7, in Nat Yay Kan Village Tract, Amarapura Township, authorities raided the photocopy shop on suspicion of selling fake COVID-19 certificates and township passing cards.

An official from the Amarapura Township Health Department has filed a case against the photocopy shop owner, 32-year-old, at the MyitNge police station.

On 9 December 2020, while village authorities were serving their duty at the COVID-19 checkpoint of the Thalaegon Village, Patheingyi Township, Mandalay Region, Maung Htay (aka) Nga Htay who is a resident of the Thalaegon Village arrived by motorcycle and refused to accept checks and hit the gate with his motorcycle, and beat two village authorities with an iron chair.

After the incident, village authorities complained at the Ohn Cahw Police Station and the members of the police force went to Maung Htay home’s to make the arrest. When the members of the police force arrived in front of his home, Maung Htay threw bricks, verbally abused, and attacked the police with a sword, two police members were injured. The police arrested him by shooting him with a gun, according to the police records. The responsible person of the Ohn Chaw Police Station charged Maung Htay (aka) Nga Htay under section 25/26 of the Natural Disaster Management Law and penal codes.

At a clothing store in Kyaw Kyaw Moe’s home, Pyay Gyi Kyatthayay West Ward, Aung Myay Thar San Township, Kyaw Kyaw Moe and his staffs are accused of transporting and unloading goods without wearing masks or face shields, they were hence charged under Section 25/30(a) of the Disaster Management Law at the Aung Myay Thar San City Police Station.

Residents of Aung Myay Thar San Township complained to Kyaw Kyaw Moe and his staff, and authorities warned them three times. Even with authorities warnings, they did not obey and continued in this manner without wearing masks or face shields on 10 December 2020 at 11:30 am.

People who verbally abused and punched the responsible persons at the COVID-19 checkpoint, charged with not only Penal Code, but also Natural Disaster Management Law

Taungoo Township Police Station No. 2 charged 3 men, including Aung Ko Latt (aka) Min Sar under section 294, 506, 323, 114 for verbally abusing and punching a volunteer who is serving his duty at the COVID-19 checkpoint where the top of the highway road on 24 December 2020 at 9 pm in Bago Region. Moreover, they will be charged with Natural Disaster Management Law, said Taungoo Township Administrator U Tun Tun Win.

In the incident, when a man from a philanthropic organization and another man were serving their duty at the COVID-19 checkpoint at the top of the highway road, they stopped a Mark II car and checked and then quarreled with Aung Ko Latt (aka) Min Sar who was the driver. After that, Aung Ko Latt went back to his car and came back to the checkpoint with two men and then verbally abused and punched, said the leader of the philanthropic organization.

On 8 December 2020, 8 people who wore guerrilla outfits from Mon State were charged under section 25/30(b) of the Natural Disaster Management Law for entering Maubin Township, Ayeyarwady Region without travel documents. Authorities knew those people came due to land disputes in Kyone War Gyi Village, Maubin Township, the authorities reported this to the Regional Government then took action in accordance with the orders of the Regional Government.

Those people are known as volunteers with PVB and they have been working in land dispute cases. U Tin Win, a resident of Kyone War Gyi village, said that the group came here once in 2019. They came to our tent and forced us to leave and threatened our lives so we had to flee from the village.

The Land Enquiry Committee of the Ayeyarwady Region, led by Prime Minister Hla Moe Aung, was inquiring within the three months on land disputes between company and land owners concerning 50 acres of land on Chaung Thar Beach. The committee made a decision that the company won this land dispute. Therefore, the four family members held a press conference in Pathein on 6 December 2020.

A 15-year-old girl in quarantine raped

On 27 December 2020, a 20-years-old man raped a 15-year-old girl who was kept in a quarantine center in the Ngar Gyi Gayet Village, Son Thike Village Track, Maubin Township, Ayeyarwaddy Region, according to the Maubin Myoma Police Station.

While the girl, who came back from Dala Township, Yangon Region, was sleeping with 3 other women in the downstairs’ of the quarantine center, she heard the door knock and she opened the door and a man who was being kept in the quarantine center gagged her mouth and took her into his mosquito net, and raped her one time, according to the police records. Her family members complained at the Maubin Myoma Police Station on 29 December 2020. According to the family’s complaint, the Maubin Myoma Police Station has a case filed under Section 376 of the Penal Code.

Residents said that safety has become more important for women who have been quarantined during the current Covid-19 outbreak.