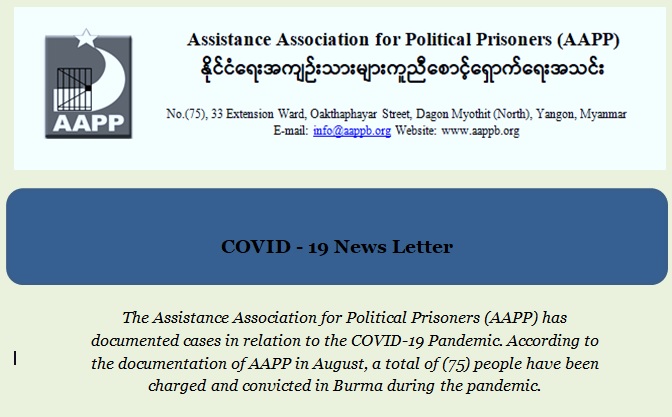 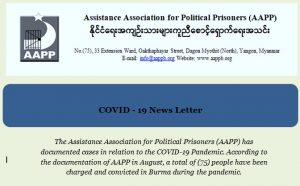 The Assistance Association for Political Prisoners (AAPP) has been monitoring and documenting cases related to COVID-19 Pandemic since April and releasing a monthly COVID Newsletter. According to our documentation in August, a total of 75 people have been charged and convicted in Burma during the pandemic.

12 persons have been charged and convicted under Section 18 of the Prevention and Control of Communicable Diseases Law and two persons are serving sentences in prison under Section 30 (a)  of the Natural Disaster Management Law.

In addition to this, (15) have been charged and punished under Section 188 of the Penal Code for failing to abide-by the night curfew and (2) has been charged under Section 16(c) of the Narcotic Drugs and Psychotropic Substances Law . Moreover, a total of (44) persons were penalized for not wearing masks. 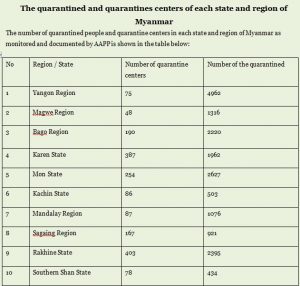 Thant Zin Aung, a police lieutenant from the International Affairs Department of the Special Branch, posted on his social media page a photo of himself wearing a police uniform and a mask with a printed image of the State Counselor. Thereafter, on 17 August 2020, Police Lieutenant Colonel assigned a Police Major to record a summary of evidence in order to take action against a member of the police force for violating the rules and regulations issued by the Myanmar Police Headquarters and issued the directive to summit the final report on 19 Aug 2020.

According to the office of Kachin State Police Force, some heroin and syringes were found in a COVID-19 facility quarantine center of the public playground of Maungkai, Moegaung Township, Kachin State on 8th August, 2020. The case was opened at Myoma Police Station under section 16(c)/21 of the Narcotic Drugs and Psychotropic Substances Law.

An auxiliary police officer of the criminal department of Kachin State police office said that three syringes filled with heroin were found in a sack of fried bananas of Zaw Win Latt who came to visit quarantined Phyo Zin Win Maung.

It is alleged that the tract administrator of Shan Laebyin Village, Laiktho Township, Karen State, has been reported to the administration department of Laiktho for allegedly not distributing the full amount of money given by the state for families of no regular income.

According to Saw J.A Win Myint, a member of Karen State parliament, the tract administrator collected MMK 1,000 of subsidized money for per household and MMK 5,000 per pregnant woman and child under 2 years. The village tract of Shan Laebyin consists of 18 villages and 400 households of the villages have no regular income, so the Union Government subsidized them a total of MMK 8,000,000 cash through the administrator.

On 20 Aug 2020, the Ministry of Health and Sports issued an order under section 21 (b) of the Prevention and Control of Communicable Diseases Law. People in the township who are included in the stay at home programme shall follow the following rules:

(a)  To stay at their homes (those who need to perform their duties at governmental department, organizations, companies, factories and workplaces not included)

(d)    To put on masks when going outside

(e)   To allow only authorized vehicles, and buses providing transport services to those who are going to workplaces to perform their duties and pass through the wards

Action will be taken against those who fail to abide by this order under the Prevention and Control of Communicable Disease Law.

However, some people from Sittwe Township are still failing to abide by the order so action will be taken in accordance with the law from 24 August 2020, police officers said. Therefore, over 30 persons who did not wear masks were taken to the police station, then asked to sign a pledge and returned them back, it is said.

There were 53 confirmed cases of COVID-19 in Rakhine State from 16 Aug 2020 to 23 Aug 2020. Moreover, some people who contacted them and their family members have been quarantined.

On August 25 2020, 44 people were penalized MMK 10,000 for not wearing face masks in MaungDaw Township. They were then educated to wear masks when going outside every time. In Maungdaw Township, the Joint Departmental Inspection Team for COVID-19 Prevention and Control has divided into two groups in the city on the morning of August 25 to educate the people to wear masks when going outside every time and to pay a fine to the people who don’t wear the masks. Moreover, authorities informed them that if they were found again without wearing masks, they would be taken further action under the Prevention and Control of Communicable Diseases Law.

David Lah, a Christian preacher and U Wai Htun, an associate to David lah were each sentenced to 3 months imprisonment  under section 30 (a) of the Natural Disaster Management Law. They conducted a religious preaching event on 7th April at Mayangone Township, and the two had a lawsuit filed against them on July 2nd at Mayangone Township Court. The court judged them guilty of disobedience to the law on 6th August, 14th August was a further hearing of the case. U Wai Htun was the owner of a recording studio, Nawarat, it is said.

The In-Charge of the General Administration Chan Aye Tharzan Township Department, said that some 15 people who contravened the night curfew on 11 Aug 2020 and 12 Aug 2020, were sentenced to one month imprisonment under Section 188 of the Penal Code by the respective township courts in Mandalay Region.

According to the Monywa Municipal Committee, 56 common shops and restaurants were fined MMK 5,000 in fines for failing to follow state instructions on COVID-19.

According to U Htun Htun, a deputy director of the municipal committee of Monywa, 297 shops have been allowed to be reopen under instruction by the Ministry of Health and Sports in Monywa. 56 of them were found to not be abiding by the instructions when authorities of health department, township municipal committee and administrators made surprise checks from 6 to 8 of August. U Htun Htun said “we have already warned them for a first time offence against the instruction and had them sign their names. In this second time, 20 common shops and 36 restaurants were found disobedient to the instructions. So, they were fined MMK 5,000  each.”

People who live in the villages of Watlet Township, Sagaing Region, have said that there has been corruption when village authorities have been given support money by the Government supposed to be for villagers in COVID-19 period. And even though they have, no action has been taken.

The lead complainant U Zaw Myo Aung from Ohnnel Boat (South) Village, complained that the Township Administration Department members paid those who weren’t included on the lists and did not pay those who were included. Discovered when he looked at the lists from Member of Parliament U Maung Maung Win. As a result of the complaint, the villagers have been summoned and investigated, but so far nothing has changed, he said.

Likewise, the lead complainant from Ywar Thar Gyi Village said that even though they complained to Sagaing Division Chief Minister Dr. Myint Naing, he hasn’t solved it so far.

Magway Division Police Chief Hlaing Tint said that there are 4 cases in Magway District, 1 case in Minbu District, 9 cases in Pakokku District, 2 cases in Thayet District and 3 cases in Gantgaw District, of prosecution in accordance withPrevention and Control of Communicable Diseases Law (1995) for failing to comply with the orders that issued by the Ministry of Health and Sports.

The Magway Division Township Police have been telling people to protect against COVID-19 and wear masks.

Visitors and Staff of KTV Sentenced in Pathein

On 7th August, total 12 persons, 10 males and 2 females who were a manager and visitors of 999 KTV located in ward(15), Pathein Township, were sentenced to two months’ imprisonment by Pathein Township Court under Section 18 of the Prevention and Control of Communicable Diseases Law for contravening the regional rules during the COVID-19 pandemic period.

When police checked at the KTV, visitors were singing. Therefore, 12 adults and a total 13 persons, visitors and a manager, were charged in Pathein Township Court by an official from the township health department.

People Penalized for not Wearing Face Masks in Hpyapon Township

Saw Nay Naing Htun, deputy chief of Hpyapon Township General Administrative Department, said that the COVID-19 Control and Emergency Response Committee had ordered people who go out without wearing masks to buy three masks for MMK 3000 and wear them immediately due to the increasing incidences of the COVID-19. The relevant authority has taken actions since 30th August after a three-day awareness campaign to prevent the spread of COVID-19.

On 24 August 2020, a former member of the National League for Democracy Party tried to open a case against Daw Aung San Suu Kyi, who is the Chairman of the National League for Democracy Party for not complying with the specified order at the Zabu Thiri Township Police Station, Naypyidaw. However, the Police Station Officer Moe Aung summoned the complainant and said that the case is a non-cognizable offence so he couldn’t accept the case.