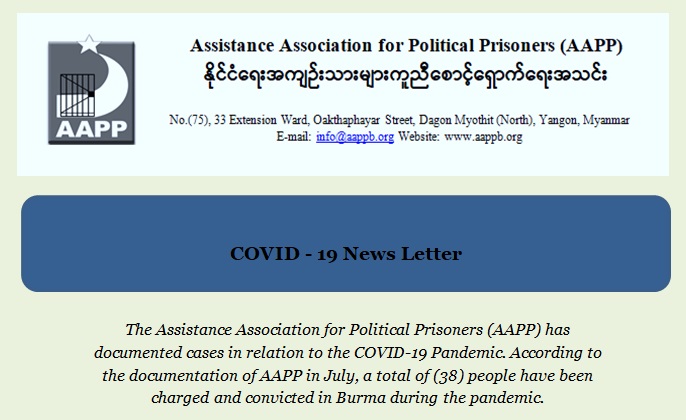 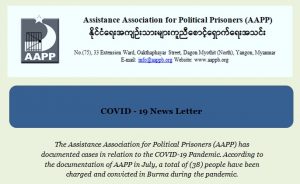 The Assistance Association for Political Prisoners (AAPP) has been monitoring and documenting cases related to COVID-19 Pandemic since April and releasing a monthly COVID Newsletter. According to our documentation in July, a total of 38 people have been charged and convicted in Burma during the pandemic.

14 persons have been charged and convicted under Section 15 and 18 of the Prevention and Control of Communicable Diseases Law and one person was charged under Section 68 (a) of the Telecommunication Law.

In addition to this, 17 persons are serving sentences and another 6 have been charged under Section 13 (1) and Section 13 (5) of the Immigration Act. Some have been punished for not wearing masks.

The number of quarantined people and quarantine centers in each state and region of Myanmar as monitored and documented by AAPP is shown in the table below: 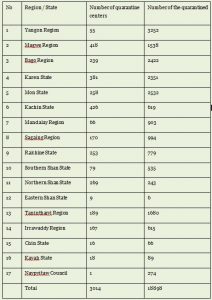 On 17th July, Myitkyina Township Court, Kachin State, made the decision to acquit the three youth artists who exhibited their illustrated drawings to boost COVID-19 awareness. In April, the three artists, Ko Zaya Htunk Ko Naw Htun Aung and Ma Jarsai, were prosecuted by U Htun Aung, the director of Kachin State Religious Affairs Department, under Section 295(a) of the Penal Code, asserting that the feature of the Death Devil in the drawing resembled a Buddhist monk.

Two Sentenced to Three Months Each for Carrying Belongings Without Inspection

In July, drivers Ko Saw Aung Thein and vehicle assistant Ko Saw Htun Lone Shein, who live in Myawaddy Township, were sentenced to three months’ imprisonment by Myawaddy Township Court for carrying the belongings of returning Burmese workers without inspection. On 3rd July, the two were stopped at a commodity checkpoint by the police as they were transporting the belongings of Burmese migrant workers who were returning from Thailand without check. Therefore, they were charged under section 18 of the Prevention and Control of Communicable Diseases Law by the Health Department.

Prosecutions for failing to comply with the rules while quarantine center

U Wai Linn Htun, the administrator of Mawlamyaing Township announced that three youths have been prosecuted on July 8 for drinking alcohol at the Quarantine Camp of Mawlamyaing Education College under the Prevention and Control of Communicable Law. The three boys drank together in a ward. According to the administrator, the age of the quarantined youth is to be confirmed as 15 years old. If the boy is under age, advice has been given from the Township attorney for  legal action against the young boy.

Punishments for illegal entry from abroad during COVID-19 period

Eleven People Imprisoned for Crossing from Bangladesh into Rakhine

In July, eleven people who migrated from Bangladesh to Maungdaw District, Rakhine State, were sentenced to 6 months’ imprisonment with labour by Maungdaw Court under Section 13(1) the Immigration Law. According to the court, out of the eleven, five were female, two were men, they were convicted on 3rd July, after the conviction of four others on 2nd July. Additionally, two were under-age and handed over to the ward administrator whereas the other two who have been on a list for the UEHRD were released.

One man and two females who crossed from Bangladesh to Maungdaw District, Rakhine State, were sentenced to 6 months’ imprisonment with hard labour by the Maungdaw Township Court under Section 13(1) of the Immigration Law on 21st July. Additionally, the court of Butheedaung fined the three people 100,000kyat($73) each under Section 13(5) of Immigration Law.

During COVID-19 period, 80 people migrated unofficially from Bangladesh to Maungdaw District, Rakhine State. Out of the 80 people, 44 were prosecuted under Section 13(1) of the Immigration Law. 23 of the 44 people were sentenced to 6 months’ imprisonment each. Then a further 18 people were prosecuted and 13 of them were sentenced to 6 months’ imprisonment each. At present, the other 14 people have taken legal action, according to Maungdaw District Immigration Department.

Two Returnees who fled Loilam Quarantine Center yet to be Found

91 Punished for Failing to Wear Masks in Pazundaung Township

According to U Myint Myat Thu, Chairman of Pazundaung Township Municipal Committee, during the three month period of COVID-19, 80 men and 11 women, were arrested and had legal action taken against them for not wearing face masks while they were out of homes. In addition to this, on July 7, 6 men and one woman were taken away in a police vehicle and fined for failing to wear masks while they were out of home. According to the Pazundaung Township Municipal Committee those who are out of their homes without wearing face masks are to be taken away in police vehicles straight to the court and fined 5000kyat($3.70)  each.

Five labour worker leaders along with two other labour rights activists, who participated in ETEC electronic factory labour strike, staged during the COVID-19 period, have been fined 5000kyat($3.70) each under the Section 15 of the Prevention and Control of Communicable Disease Law section South Dagon Township Court. Ko Myat Kyaw and Ko Myo Myint Aung, two activists for labour rights, along with other five workers of ETEC electronic factory, who are collectively in charge of 900 people, participated in a strike on April 9 for factory workers to claim their annual bonus.

Two Returnees Imprisoned for Refusing to Quarantine in Oakpho Township

U Maung Maung Than and U Than Zaw Htun, two returnees from abroad, were sentenced to 3 months’ imprisonment in accordance with the Prevention and Control of Communicable Disease Law.

One returned from Thailand, and the other returned from Las, COVID-19 case #311 refused quarantine, which had been designated by the health department of Oakpho Township, and instead stayed with their families. Therefore, Dr.Thant Zin Maung of the Township Health Department opened a case against them.

According to the police, troops from Northern Ma Ya Unit 17 found five Chinese men, aged between 18 and 24 years, travelling illegally when found at a 16-mile-checkpoint in Mandalay in the morning of July 3. The car was driven by a 40 year old man. The five Chinese men and the car driver were charged under Section 13(1) of the 1947 Burmese Immigration (Emergency Provisions) Act at Ohn Chaw Police Station. According to a police officer, the five men and the driver have been remanded in custody and sent to Osteopathic Hospital, 62 Street, Chanmya Thazi Township, Mandalay, to be tested for COVID-19.

On 3rd July nightime, a migrant returning from working on the Thai-Burma border who had been placed in the Pathein Township Quarantine Center committed suicide. Ko Nay Htet Linn was 27 years old, and from Mae Zinn village in Myanaung Township, Irrawaddy Region. He had been working along the border, in Mahachai, Thailand. Since 26th June he had been placed under watch at the Pathein Cooperative Training School, which had been designated as a quarantine center. According to Police Lieutenant Colonel Htun Shwe, spokesperson of Irrawaddy Region Police Office, the young man committed suicide with a piece of plastic in the toilet. This was the second case of suicide at in the area within a month, on 17th June a migrant worker returning from China committed suicide in a toilet of Pathein Hospital.

Punishments to Journalists related to COVID-19

A journalist called Aung Ko Ko (Mam Thar Lay) at Eleven media was prosecuted on July 1 at Ottrathiri Township Court, Naypyitaw for his comments on the death of a COVID-19 patient. On 23rd March, Aung Ko Ko (Mam Thar Lay) posted on his facebook page  “I have learnt that there were omissions in reports of Ministry of Health and Sport (MoHS)” and “a report of MoHS informed that the symptoms of 13th deceased person were viral infection and diarrhea to death whereas the primary cause of the death was withheld”. The journalist was charged under section 68(a) of the Telecommunication Law by Police Captain Ye Aung.