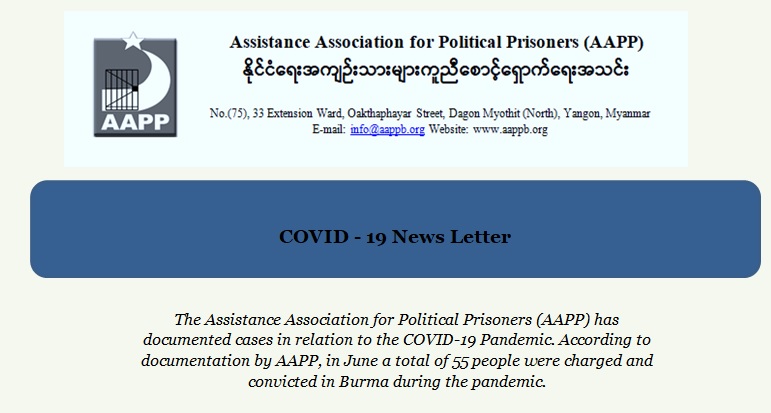 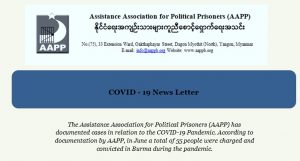 The Assistance Association for Political Prisoners (AAPP) has been monitoring and documenting cases related to the COVID-19 Pandemic since April and releasing a monthly COVID Newsletter.

A total of 670 persons were charged and convicted under Section 15 and 18 of the Prevention and Control of Communicable Diseases Law, Section 188 of the Penal Code, Section 25, 26, 27, 28 and 30 of the Natural Disaster Management Law, some were punished for not wearing masks in March and April related to contravention of specified orders. The number increased to 3705 in May, while the number dropped to 55 in June. The Government issued a night curfew order from 10 pm to 4 am in April, which was reduced to 12 am to 4 am from the 15th May.

The Assistance Association for Political Prisoners (AAPP) has documented cases in relation to the COVID-19 Pandemic in June and the detailed information is shown below: 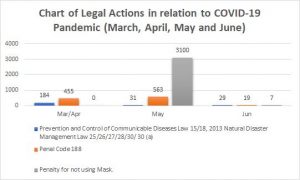 In June, 19 were charged and punished under Section 188 of the Penal Code for failing to abide-by the night curfew.

In addition to this, 29 have been charged and sentenced under Section 15 and 18 of the Prevention and Control of Communicable Diseases Law.

Moreover, a total of 7 persons were penalized for not wearing masks.

The number of quarantine centers and individuals quarantined in each state and region of Burma has been monitored and documented by AAPP and is displayed in the table below: 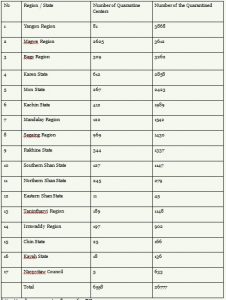 Suicides during the COVID-19 period

According to Police Colonel Kyaw Thiha at the headquarters of Myanmar Police Force, 470 people took their own life within the three months between 23rd March and 22nd June in all of 14 states and regions including Naypyitaw. In the opinion of Police Colonel Kyaw Thiha the causes of these suicides were social, health, and economic matters as well as mental stress, depression and alcohol related schizophrenia.

Of the 470 dead, it is claimed 122 persons committed suicide due to their mental stress, 116 due to socially related matters, 78 due to pre-existing illneses, 73 due to economic problems, 65 due to alcohol withdrawal and 7 due to depression. Of the 470 suicides, Mandalay was the most affected region, with 73 suicides, whereas Chin state recorded the least with 3. Bago region recorded 66, Yangon region and Shan state recorded 54 each. According to gender classifications, the 470 suicides broke down to 382 males and 88 females. This means the number of male suicides was nearly 4 times that of female suicides.

Ma Moe Thu Zar was working in Maesot, Thailand when she decided to return to Myawaddy Township, she entered Myawaddy Township illegally to avoid receiving 21 days quarantine and was driven by Aye Min Htun who smuggled Ma Moe Thu Zar in his car. The two were sentenced on 22 June 2020 to 4 month imprisonment under section 18 of the Prevention and Control of Communicable Diseases Law. They were charged at the Myawaddy Township Police Station by Dr. Nanda Win who is the Medical Superintendent of the Myawady Public Hospital.

Punishments for failing to comply with the rules at quarantine center

On 16 June 2020, Kyaw Win Hlaing, 36-years-old, was sentenced to 3 months imprisonment under the Prevention and Control of Communicable Diseases Law for returning home to Mawlamyine Township from Thailand without permission. Ko Kyaw Win Hlaing was confined to a quarantine center when he took a bicycle in the early morning of 12 June 2020 and rode it around the football playground when a security guy informed on him. According to some, Ko Kyaw Win Hlaing is suffering from mental illness.

When the police raided the Thone Pan Hla KTV shop, they arrested 23 people in total who were then charged under section 5(1)/8(c)/3(A) of the Penal Code by Police Station Officer Myo Nyunt from Laptan Township.  6 prostitutes, the owner and 16 people who worked at Thone Pan Hla KTV shop were penalized and individually fined 5000kyat under section 15 of the Prevention and Control of Communicable Diseases Law by Judge Daw Thant Thant Thin of the Laptan Township Court in Bago Region.

Over 2700 penalized for not wearing face masks in Sagaing Division

Committed Suicide whilst in quarantine

Ko Chit Thaung (Ko Chit Hla), returned from China and was hence kept for 21 days quarantine in Pathein Public Hospital, Bago Regional. He committed suicide in the toilet of the private quarantine ward on 17 June 2020. Ko Chit Thaung had previously unsuccessfully attempted to take his own life in Pathein Public Hospital using his longyi (Traditional male clothes). Those in charge at the hospital had therefore confiscated all his longyis and bought short trousers for him to wear. According to the police, his native town is Yamethin Township, Mandalay Division. After he just came back from China, he came through Yamethin Township in the evening of 16 June to see his girlfriend. Having been rejected from seeing his girlfriend he attempted to take his own life for the first time by car engine fluid.

During the COVID-19 Pandemic period, 595 people breached specified orders and were imprisoned in the respective township courts in Ayeyarwady Division. Between 18 April 2020 and 2 June 2020, 492 men and 13 women were taken to court for contravening the night curfew. Moreover, 90 people had action taken against them under the Prevention and Control of Communicable Diseases Law, Telecommunication Law, and Peaceful Assembly and Procession Law. The 595 people were imprisoned in their respective township courts and sent to the respective prisons in: Pathein Prison, Hintada Prison, Maubin Pison, Myaungmya Prison and Pyapon Prison.

According to the spokesperson of the office of Irrawaddy Regional Government, the 2 months night curfew imposed during COVID-19 period which was to end on the 18th June is now to be extended for a further 2 months. Since the first curfew was ordered on 18th April, 524 persons including 13 women have been arrested and had legal action taken against them for failing to follow the order, according to Police Lieutenant Colonel Htun Shwe, spokesperson of Irrawaddy Region Police Force Office. Of the 524 people convicted, 239 persons were from Pathein District and 76 were from Hinthada District. According to records from the Irrawaddy Region Police Force Office, the punishments for those accused listed above were one month whereas for the rest received a two month sentence.