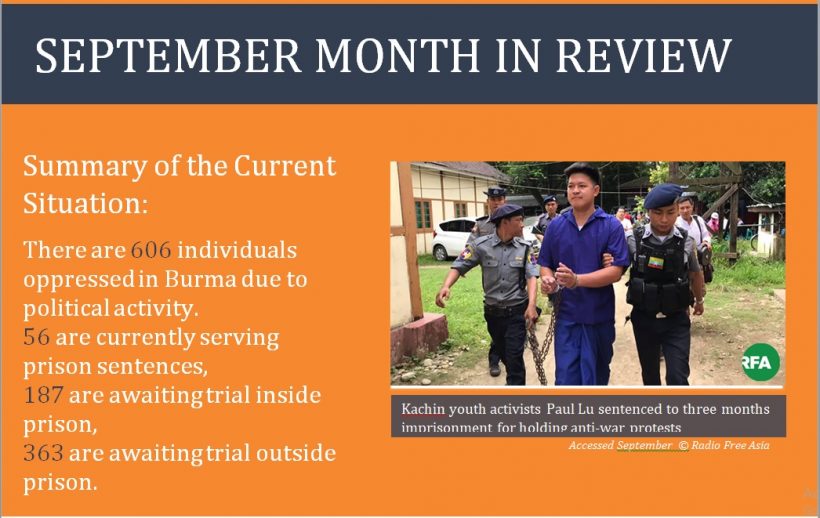 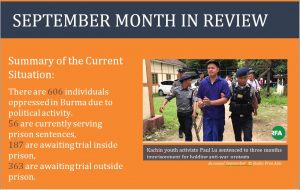 Month in Review for September

September 15 is the International Day of Democracy. However, Burma has deviated from the way of democracy due to ongoing widespread violations of human and civil and political rights. The values of freedom, the respect for human rights and the principle of holding periodic and genuine elections by universal suffrage are essential elements of democracy. These values are embodied in the Universal Declaration of Human Rights (UDHR)and International Covenant on Civil and Political Rights(ICCPR), yet are sadly missing in Burma today. In order to create conditions conducive for democracy to flourish, the Assistance Association for Political Prisoners (AAPP) urges the government to promote democratic values and a protect the human rights of all civilians and make genuine efforts to stop the conflict in ethnic areas.

In September, a total of 22 activists, civilians and labour face oppression for exercising their democratic right to freedom of expression. In September the following cases illustrate the threats faced for activists across the country;

Even though September 21 is the International Day of Peace, indigenous communities continue to disproportionately face challenges related to conflicts in ethnic areas. In September, conflicts have continued in Arakan State and Shan State, which has meant ethnic minorities face arrests and charges. Moreover, many ethnic civilians were forced to labour, to serve as guides for, and face torture from, armed groups. Some incidents from September are shown below for example;

Leing Village in Mantong Township, Shan State who were taken by the Military’s Light Infantry Battalion 421 and forced to walk in front of the soldiers as protection to the frontlines of the conflict between the Ta’ang National Liberation Army (TNLA). Two men from Lun Kyauk Village in Mong Ping Township, Eastern Shan State have been arrested by the Military. They were beaten during investigation and later released.

The indigenous people will continue to face these abuses until Burma achieves national reconciliation and nationwide peace. On September 17, ceasefire talks in Kengtung in Shan State were held between the government’s National Reconciliation and Peace Centre (NRPC), military’s representatives and four ethnic armed groups — KIO (Kachin Independence Organisation), MNTJP (Myanmar National Truth and Justice Party), PSLF (Palaung State Liberation Front), and ULA (United League of Arakan).  Seven Points were agreed including the need to reduce conflict. We welcome these positive steps and urge the government to sign the Convention against Torture and Other Cruel, Inhuman or Degrading Treatment or Punishment (UNCAT), to organize the independent investigation commission and take effective actions against those who are responsible for these abuses.

Seng Nu Pan, who was released from Kachin State’s Myitkyina Prison on September 16, described the current Condition of Myitkyina Prison. In Myitkyina Prison, over 90 percent of prisoners are imprisoned in relation to the drug cases and prisoners have to pay money to receive bedding, are only allowed 15 cups of water for showering, are beaten and tortured by prison staff and women prisoners are not allowed to go to the library.

In Kayah State, six Karenni young activists, who are awaiting trial in prison under Section 10 of the Citizen Privacy and Security Law, have been denied access to visits from friends, family and supporters and are under a solitary confinement as they staged a protest in prison. In Mandalay Division, according to a July 23 amendment of the Child Law, youth rehabilitation centers must now accept all children under the age of 18 who are facing trial. Now, the Mandalay Youth Rehabilitation Centre is over its capacity of 200 juveniles and currently holds a staggering 480 youth.

It is clear that all prison staff need to urgently understand and follow the Basic Principles for the Treatment of Prisoners and  Standard Minimum Rules for the Treatment of Prisoners along with Universal Declaration of Human Rights (UDHR) and to provide trainings staff from the authorized organizations in how to respect the human rights of all prisoners.

The prolonged trial, so common in Burma, debilitates the judiciary system. In September two heavily prolonged cases came to light. A decision has not yet been made in a five-year-old defamation case, filed against staff members of the Weekly Eleven Journal.

After facing trial for two years, a decision has finally been made against eight farmers from Maletto village-tract in Maubin Township, Ayeyarwaddy Division.

These cases shows the challenges of judiciary system and those facing trial. As  Judiciary System of Burma based on Englsih Common Law Legal System, it is necessary to amend in the judiciary system. Especially, the judiciary system will be more effective if we reestablished the Ministry of Justice which was closed in 1948. As Burma is implementing the Judicial Strategic Plan (2018 – 2022) the weakness of the judiciary system should be reviewed immediately and the government needs to address these issues without delay.

Land issues remain a major issue. In September, approximately 60 local farmers staged a protest to demand the proper compensation for land seized from local farmers for oil exploration in the Mann oilfield area in Minbu Township, Magway Region. Farmers whose land has been confiscated by the Hpa-an Correctional Department in Karen State, staged a protest against the actions of the Karen State Government. Local farmers in Chin State held a press conference to get back their farmland which were confiscated in Hakha and the surrounding area. The delay process to return the confiscated land affects not only farmers but also the land sector. Therefore, we urge the government to follow the ratification of the International Covenant on Economic, Social and Cultural Rights (ICESCR) and solve the land issues urgently.