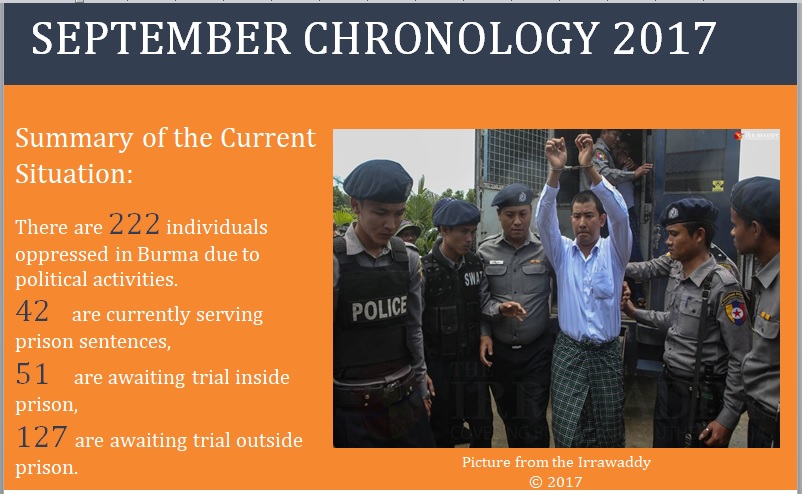 On September 25, a ceremony was held at the Dhamma Piya monastery in Thingangyun Township, Rangoon, in commemoration of the tenth anniversary of the Saffron Revolution. Monks at the commemorative ceremony called on the Government to implement constitutional reform, echoing one of the main goals of the Saffron Revolution – to end Military involvement in politics, a demand that remains unfulfilled. The series of protests, led by students, political activists, and Buddhist monks, that took place during the months of August, September, and October in 2007, marked a pivotal moment in Burma’s struggle for democracy and the fulfillment of human rights. In late September of 2007, thousands of protesters were arrested and detained, and dozens lost their lives,  when the Military Government, began violently opposing the protests. AAPP stands in solidarity with, and honors those who were affected because of the violence during the Saffron Revolution protests.

In September, one charge was filed against Su Su Kyi Swe and one sentence was delivered against San Shwe under Section 66(d) of the 2013 Telecommunications Law. The continued use of Section 66(d), which criminalizes individuals’ freedom of expression, suggests that the minor amendments to the law enacted by Parliament in August are insufficient and do not safeguard individuals’ human rights. Since the Bill to amend Section 66(d) was enacted, criticism has largely been deflected away from the law, despite the risks that the law poses remaining as relevant as before. Charges under the law remain criminal, which continues to restrict one’s right to freedom of expression. Offenses under Section 66(d), including ‘defaming’, ‘disturbing,’ and ‘causing undue influence’, remain inadequately defined and will continue to allow the law to be too liberally used, leaving all individuals vulnerable to criminal prosecution.

AAPP continues to stress that defamation, the clause most individuals have been charged for under Section 66(d), should not be considered a criminal offense because defamation is not significant enough to merit the deprivation of one’s liberty. True defamation, that falls within specified criteria, should instead be considered civil misconduct, settled through civil proceedings, and not be considered a crime punishable by a criminal sentence. AAPP urges the Government to repeal Section 66(d) or significantly amend the provision by removing the law’s criminal character and more precisely defining its charges. The maximum two-year criminal sentence, that Section 66(d) currently stipulates, is overly punitive allowing for the abuse of human rights and placing further unnecessary burdens on prisons, which have significant issues regarding conditions, not least overcrowding.