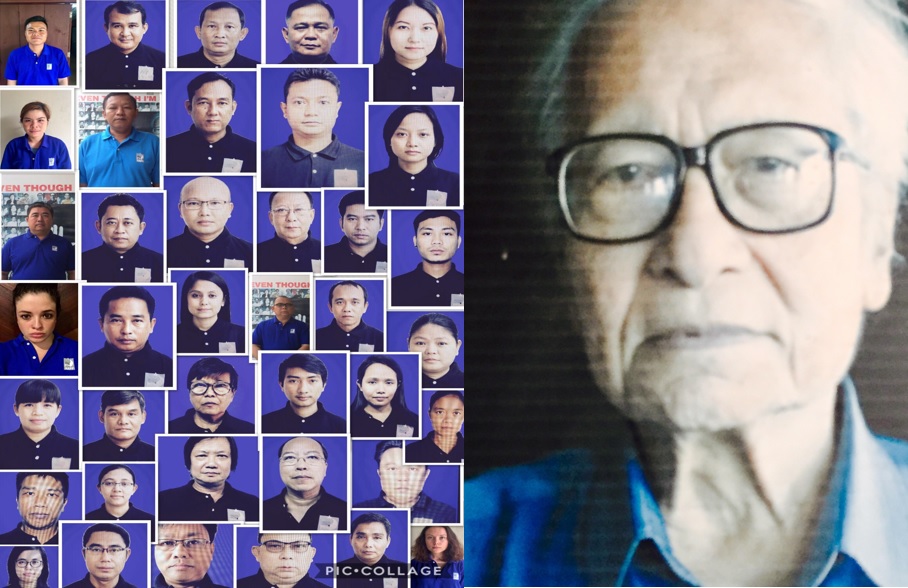 AAPP staff stand in solidarity with U Win Tin on Blue Shirt day calling for the release of all political prisoners.

On the occasion of the third anniversary of the death of U Win Tin, 24 organisations are calling for the immediate release of all individuals detained or imprisoned on fabricated, politically motivated charges, and for the establishment of an independent and effective prisoner review mechanism to bring about an end to arbitrary arrests and detentions in Burma/Myanmar.

U Win Tin, who served nearly 20 years in jail as a prisoner of conscience, famously pledged to wear a blue shirt, the same colour shirt he had to wear in prison, until all political prisoners in the country were released. On 21st April, people around the world will be wearing a blue shirt or blue clothing in solidarity with U Win Tin’s call, which is unfortunately still relevant today.

One year after the NLD-led government took power, and despite a series of prisoner releases, there are still scores of people behind bars as a result of politically motivated arrest and imprisonment. Repressive laws which arbitrarily restrict the rights to freedom of expression, association and peaceful assembly remain in place, and authorities continue to use them to intimidate, arrest and jail human rights defenders, other peaceful activists, and members of ethnic minorities.

In addition, the civilian-led government has yet to take effective action to address the country’s long history of politically motivated arrest, detention and imprisonment.

We note that in her most recent report to the UN Human Rights Council, the Special Rapporteur on the situation of human rights in Myanmar has recommended that the government undertake by October 2017 “a comprehensive review of all cases, based on broad and public consultations with all relevant stakeholders in view of the discrepancies in the numbers of remaining political prisoners.”

Our organisations believe that the establishment of an independent, effective and properly resourced prisoner review mechanism with a clear mandate and procedures to address both short and long-term issues relating to spurious politically motivated prosecution would be an important step to address the decades-long problem of political imprisonment in Burma/Myanmar.

Such a review mechanism should:

The greatest tribute to the memory of U Win Tin would be to achieve his dream of the release of all prisoners of conscience in Burma/Myanmar. We believe that establishing such a review mechanism would be a positive step towards achieving that goal.

U Win Tin, a journalist and founding member of the National League for Democracy, was one of Burma/Myanmar’s longest serving political prisoners, describing his time in jail from 1989 until 2008 as “living in hell”.

On 7 February 2013, then President Thein Sein announced the establishment of the Committee for Scrutinizing the Remaining Prisoners of Conscience “to scrutinize the remaining political prisoners serving their terms in prisons throughout the country so as to grant them liberty”.  However, it quickly became clear that the Scrutinizing Committee had serious shortcomings. By the end of 2014 it was unclear whether the Scrutinizing Committee was even operational, leading to increasing national and international criticism.

On 5 January 2015, then President Thein Sein announced the reconstitution of the Scrutinizing Committee into the Prisoners of Conscience Affairs Committee, which was to comprise 28 members and which would “promptly [carry] out prisoners of conscience affairs at the grassroots level.” However, it appears that the Committee never even met and no information has been made publicly available regarding its mandate, procedures or activities. The lack of information and action appears to justify concerns that the Committee had been reconstituted merely to deflect growing national and international criticism, rather than to resolve the issue of remaining political prisoners.