Home > Press Release > Even Though I Am Free I Am Not: The Need for the Campaign in 2015

Even Though I Am Free I Am Not: The Need for the Campaign in 2015 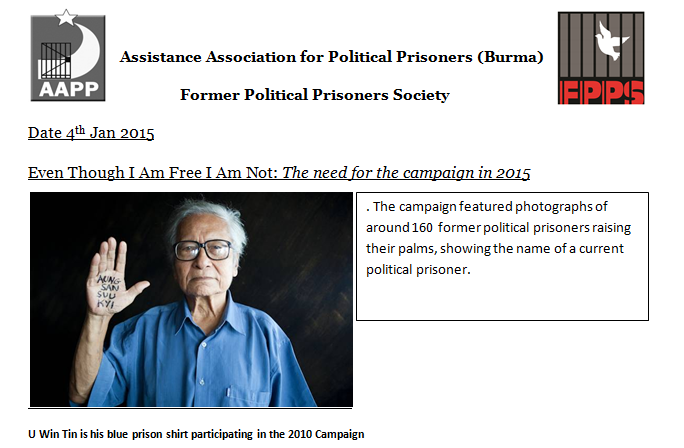 Even though I am free I am not. This was the message the groundbreaking 2010 photography campaign sought to convey to the world. The message that the burgeoning road to freedom in Burma would be forever blocked while political prisoners remained. Freedom is not solely liberation from prison. It is also the need for a free country, a Burma where political freedoms and civil liberties are respected and there no longer exist political prisoners. This photo campaign, initiated by award winning documentary journalist James MacKay and The Assistance Association for Political Prisoners (AAPP), in conjunction with the Democratic Voice of Burma (DVB), demonstrated the solidarity and commitment to each other amongst former and current political prisoners. 160 former prisoners were photographed and the event was debuted at the headquarters of Amnesty International in London in June 2010.
At the time of the 2010 campaign there were still thousands of political prisoners in Burma’s jails. The number currently incarcerated in 2015 is considerably less than that, with AAPP figures recognizing around 164 current political prisoners. These numbers do not adequately reflect the reality of the situation in Burma. The steady number of releases or amnesties gives the impression that the current government recognizes the basic rights and freedoms of their people, and support the release of wrongly imprisoned activists. In actuality the number of political and human rights activists imprisoned has steadily increased since the beginning of 2014, with no official recognition of their status as political detainees. They are still imprisoned as criminals, many repeatedly imprisoned for continuing to demonstrate their brave commitment to a free democratic Burma. The the commitment this campaign symbolizes is demonstrative of the belief that no political prisoners should be left behind as the country moves towards a democracy. This campaign ensures they will not be forgotten and their freedom will be fought for.
January 4th 2015 celebrates Independence Day in Burma, with 2015 looking to be a important year for the future of the country. Independence Day marks the liberation of the country from British Colonial rule in 1948. In 2015 it should also recognize the journey that lies in front of the country now. The discussion of Burma as being in the middle of a democratic transition fails to adequately take into account steps that still need to be taken. These steps include securing the freedom of all remaining political prisoners. The needs for reform at a constitutional and judicial level are also essential first steps to take before a true democratic transition can be enacted.
The country faces many different challenges and difficulties in the run up to elections in 2015. The issue of political prisoners has been dangerously close to falling from international agendas with other issues being deemed more pressing in Burma. While civilians are continuing to face repression, harassment, abuse and arrest for defending basic civil liberties, Burma will not achieve the free democratic status they desire. The human rights of the people are not being recognized or protected by the current government and arrests are showing no sign of abating. This campaign is as necessary now as it was when there were still thousands of political prisoners remaining in Burma.
We thank our supporters, friends, colleagues and fellow activists for the continued solidarity they show with civil society in Burma. The supporters of political prisoners remain steadfast in their assertion that there can be no national reconciliation in Burma while political prisoners remain. This campaign reiterates the call to immediately and unconditionally release all remaining political prisoners and end the ongoing arrests that still pervade in Burma.
For More Information
Thet Oo +95(0) 9 73107933
Tin Maung Oo +95(0) 95501429
Aung Myo Kyaw +94(0) 942811 7348
Bo Kyi +66(0)81 9628 713