AAPP and Hannah Scott (2011) Toture, Political Prisoners and the Un-Rule of Law 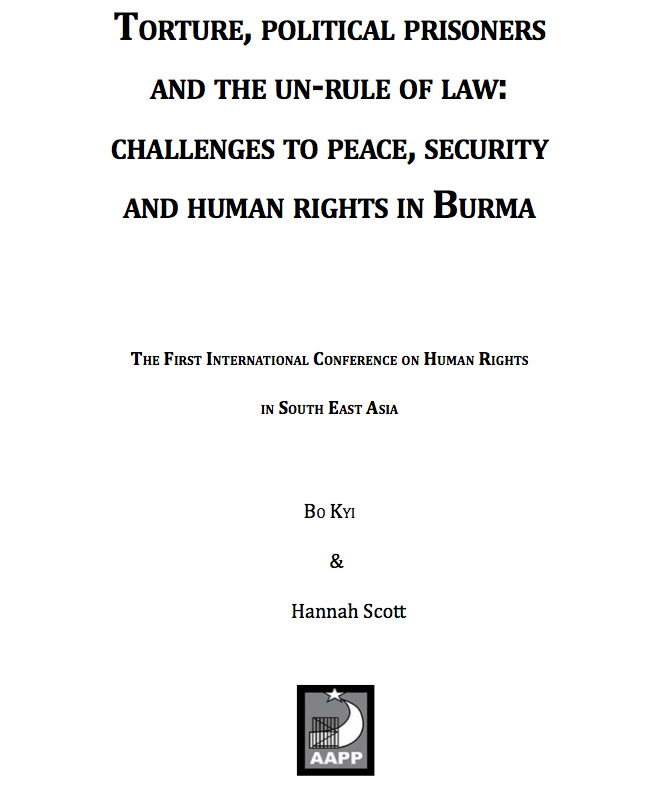 Despite the fact that torture constitutes one of the most brutal attacks on human dignity, and not withstanding the absolute prohibition of torture under any circumstances, almost no society is immune from torture. In many societies, it is practiced systematically. Burma is one such country. In addition, conditions of detention, in Burma, are appalling and arguably qualify as cruel, inhuman and degrading, amounting to torture. This paper explores the nature of torture in Burma’s interrogation centres and prisons. Evidence suggests the practice of torture, in Burma, serves the purpose of extracting confessions and information; extracting money; as a punishment; and perhaps, most dangerously, of silencing dissent. The victims, in Burma, are often activists with different agendas, and include members of the political opposition, ethnic groups, labour activists and human rights defenders. The State Peace and Development Council (SPDC) continues to deny the existence of political prisoners, arguing that ‘there are only criminals in Burma’s prisons’ and refutes claims of torture and ill-treatment. However, the deplorable conditions in these places of detention are well documented. The Assistance Association for Political Prisoners (AAPP) has systematically documented hundreds of cases of torture experienced by political prisoners, dating back to 1988 and as recent as 2010. Through interviews, former political prisoners recount the torture and ill- treatment, which they suffered, as well as that which they have witnessed.

Download: Torture, political prisoners and the un-rule of law (225kb)